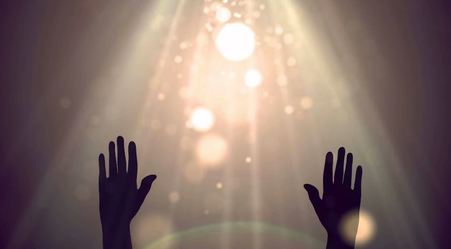 ​​October 15, 2017
I'm Next
Mark 5:21-29 - (NIV)
21 When Jesus had again crossed over by boat to the other side of the lake, a large crowd gathered around him while he was by the lake.22 Then one of the synagogue leaders, named Jairus, came, and when he saw Jesus, he fell at his feet. 23 He pleaded earnestly with him, “My little daughter is dying. Please come and put your hands on her so that she will be healed and live.” 24 So Jesus went with him. A large crowd followed and pressed around him. 25 And a woman was there who had been subject to bleeding for twelve years. 26 She had suffered a great deal under the care of many doctors and had spent all she had, yet instead of getting better she grew worse. 27 When she heard about Jesus, she came up behind him in the crowd and touched his cloak, 28 because she thought, “If I just touch his clothes, I will be healed.” 29 Immediately her bleeding stopped and she felt in her body that she was freed from her suffering.
This sermon was short and to the point: It doesn't matter what number you are in line, but if you have faith, you're up next. Let's start with the definition of a miracle. During his sermon, Rev. Macon defined a miracle as something extraordinary that happens by bypassing normal to bring about the supernatural. Despite what your haters might say, miracles can still happen today. Those haters will sew doubt into your faith making you believe that what God did in the Bible isn't possible today. It is. As Christians, we have to know what God can do. But we can't only know; we have to also prepare and ready our minds that we are ready for change. We are ready to allow God to step in and perform miracles in our lives. When you combine knowing, a made-up mind, and faith, Rev. Macon says, "You're NEXT." Be blessed!

​October 1, 2017
A Fishing Trip Like No Other
Luke 5:1-11 - (NIV)
One day as Jesus was standing by the Lake of Gennesaret, the people were crowding around him and listening to the word of God. 2 He saw at the water’s edge two boats, left there by the fishermen, who were washing their nets. 3 He got into one of the boats, the one belonging to Simon, and asked him to put out a little from shore. Then he sat down and taught the people from the boat. 4 When he had finished speaking, he said to Simon, “Put out into deep water, and let down the nets for a catch.” 5 Simon answered, “Master, we’ve worked hard all night and haven’t caught anything. But because you say so, I will let down the nets.” 6 When they had done so, they caught such a large number of fish that their nets began to break. 7 So they signaled their partners in the other boat to come and help them, and they came and filled both boats so full that they began to sink. 8 When Simon Peter saw this, he fell at Jesus’ knees and said, “Go away from me, Lord; I am a sinful man!” 9 For he and all his companions were astonished at the catch of fish they had taken, 10 and so were James and John, the sons of Zebedee, Simon’s partners. Then Jesus said to Simon, “Don’t be afraid; from now on you will fish for people.” 11 So they pulled their boats up on shore, left everything and followed him.
By this point in the Bible, Jesus had built his reputation. People knew who he was and gathered to hear him preach and speak. Why? Those people knew they would receive strength, hope, power and deliverance from Jesus's words. This fishing trip was about catching men - not fish. Jesus used the fishing boat as his pulpit and had it filled to the brim with his people. Today, Rev Macon explained to us three ways the church should be like the boat.
1. Church should be intimate and close. Since Jesus's boat was full, people had to stand very close to each other. Church should be the same way. It should be close. You come to church to get your cup refilled and ready to take on your week. Think of your church like the corner of a boxing ring. A boxer goes to the corner to get fuel and strength to step back into the ring and fight a little longer. 2. Church should be a place of instruction. It's a place for you to come and learn the Word of God. It's a place of teaching. 3. The church is also a place of frustration and irritation. Wait, what? Yes, we know. Why go if you're going to frustrated and irritated? Just like the men who were fishing, they toiled all night and caught nothing. Do you sometimes feel that way? You pour out your heart and receive nothing in return? We get it. Our message? Keep pouring. Keep pouring your heart and soul into doing God's work. Remember, it's not about the people that attend or the one's that help. God sees your work. Don't give up, and as always, be blessed!